Everything You Need To Know About Australia’s Giant Northern Termite The Mastotermes Darwiniensis, Australia’s giant northern termite, is the most primitive termite alive and are typically found in tropical Queensland, Northern Territory and Western Australia. Frighteningly, as the weather continues to warm up, the Mastotermes is continuing to head south with recent claims of identification in Queensland’s Gold Coast. The giant termite is the world’s most destructive termite species and can completely destroy a home in a matter of months! It is known to cause severe damage to houses, buildings, bridges, poles, posts and other timber structures, and with a varied diet is also known to feed on a range of other materials including plants and organic matter. It’s definitely a species of termite you need to be able to identify (and eradicate)! Here’s everything you need to know. This particular termite is known to have caused more economic loss than any other insect in Northern Australia. The giant termite has the ability to kill a living tree in order to host its colony. In addition to feeding on the cellulose found in wood, they also feed on a range of native trees and plants and will damage ivory and leather. The giant northern termite will also destroy:

This makes it extremely difficult to farm vegetables in highly populated areas, such as Northern Australia.

Location and Size Of Colonies

Australia’s giant northern termite typically builds their nests on in the base of tree trunks or tree stumps. In native areas, the giant termite’s population is generally quite small (several-thousands), however when they exist in build-up residential areas their nests have been found to be very large (several-millions). 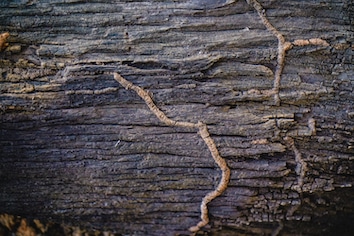 Early on, the presence of these destructive colonies can be difficult to detect. The most common sign of an infestation is the drying, wilting and yellowing of leaves, as well as the death of entire branches on a healthy tree. Suspected colonies can be affirmed when noticing new growth that wilts and dies fairly quickly, mud-covered galleries on tree trunks (called ringbarking), as well as the folding of tree branches.

Their galleried that stem from the next can be longer than 100m and are typically 20cm underneath the soil’s surface, however, can also be several meters deep when sourcing water or following tree roots.

Eradicating A Colony With TermiGold Once detected, this species of termite must be destroyed quickly to prevent costly damage. This can be done with the help of TermiGold’s bait stations. These stations are durable, high-quality and simple to install. Positioning termite stations around your home is the best long-term solution for protecting your home. They come available in a variety of sizes suitable for different size homes including:

To prevent the dreaded attack of the Mastotermes Darwiniensis, Australia’s giant northern termite, shop online, in-store, or get in touch with TermiGold for advice.